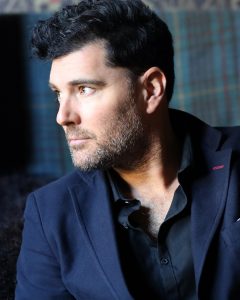 Edward Docx is the oldest of seven children. He is half Russian on his mother’s side. He was born in the North East and grew up in the North West. He went to school near Moss Side in city-center Manchester and then on to Christ’s College, Cambridge, where he read English Literature. He has lived in London for the last twenty-five years where he works.

He started writing fiction when he was in his teens and completed three unpublished novels before The Calligrapher, his debut, was bought by 4th Estate and published in 2003. Let Go My Hand will be his fourth novel. His second novel – Pravda – won The Geoffrey Faber Prize and was long listed for the Man Booker. The novels are translated and published all over the world.

Edward Docx’s journalism has been listed for the Orwell Prize for journalism and he has written for all the major magazines and newspapers – most frequently The Guardian and The New Statesman in the UK. He worked in Westminster and has interviewed several leading politicians and remains politically active. He is also a long standing teacher of The Guardian’s Masterclass on fiction.

Docx writes for television and film – most often collaborating with PJ Hogan, the Australian film director. HIs screenplay of Let Go My Hand is being produced by Kevin Loader and Cecilia Cordeiro.