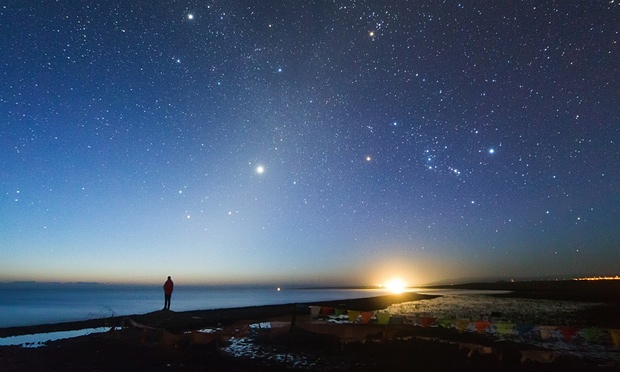 Note to all readers: keep going. I spent 137 pages of The Ecliptic thinking it was a very good but misconceived novel in which a talented male author had taken an artistically self-sabotaging decision to make his first-person protagonist – Elspeth Conroy, a Glaswegian painter – a woman with an oddly oblique antiquarian voice that even her own biography rendered suspect. It would ruin the plot if I were to tell you why my margin notes turned out not to be wholly germane. Suffice to say that the answers can be found in the fourth part, entitled “Clarity”, in which we learn how the scenes in the artists’ colony off the coast of Istanbul in parts one and three relate to Elspeth’s biography.

This is only Wood’s second novel – his first, The Bellwether Revivals, won the Commonwealth book prize – and as such, The Ecliptic represents a resounding achievement. Though I was not a huge fan of part one, it was everywhere apparent that Wood is the real deal: scrupulous in his choice of words, adroit with plot, assiduous about drawing character and engagingly pursuing an ambitious theme. On this last point, The Ecliptic is one of the most absorbing explorations of the artistic process that I’ve ever read in fiction – both in the painterly sense and in the wider psychological sense of how genuine day-in day-out creativity works. Or doesn’t. “Talent sinks,” Wood writes, “into the lightless depths like so much rope unless you keep a firm hold of it, but squeeze too tight and it will surely drag you under.”

And yes, Wood is startlingly good at conjuring images. Holden, Elspeth’s first teacher, would twist his ear “as though turning off a valve”. The love of her life – the sottish older artist Jim Culvers – is “not the sort of man for whom you felt an immediate attraction”, but “over time, he quietly detuned the strings of your heart, until his peculiar key became so familiar that you believed it to be the only one”. (I love how Wood rescues that cliche to create something moving, new and apposite.) Later, Elspeth will “wind in” her smile. These human moments are so very hard to write about inventively and attentively with any kind of freshness; but Wood does so often and deftly.

The plot follows Elspeth’s breakdown in the course of her two quests: the first in love, to find the undependable but authentic Jim after he goes missing; the second in art, to paint a mural featuring the ecliptic – the sun’s journey through the heavens as seen from Earth – and, as such, a chimera (since the sun doesn’t actually move).

The reason I couldn’t wholly jettison my notes, though, was that the novel remained unconvincing on one point concerning Elspeth’s backstory. She grew up, she tells us, in a Glasgow tenement on Clydebank in the late 1940s and 50s. Her mother worked in a factory, where she “punched her timecard every morning”, while her father “scorched the skin right off his knuckles daily, caulking ships”. But, to this reader at least, the elliptical academic rhetoric of many of Elspeth’s thoughts suggested a very different provenance.
The least persuasive section takes place at a gallery party, where Elspeth spends the time with a boxer-turned-artist whose paintings are “brutal and unthinking”. But the dialogue – indeed, the whole scene – is too mannered and stilted to pass off as a 1960s art-party encounter between dockyard daughter and ex-welterweight. I could not help but ask myself why Wood had given himself such an issue. (He senses the danger because, tellingly, he has the villain of the piece remark on her “gentle” accent.) Why not have Elspeth born someplace else? Instead, her childhood seems a bit gestural – an attempt to annex Clydebank in order to offset some other anxiety, perhaps. And, by the end of the gallery scene, the unthinking boxer is advising Elspeth to try the oysters at the restaurant after-party.

Conversely, Wood’s action writing is superbly purposeful and unself-conscious. The miscarriage on the boat, the mad loch-side clock burial, and the escape from the artists’ colony are all dramatic, exciting and kinetic. Of the clock: “I buried it alive. Now I didn’t have to wonder about the hours ticking by. There were no hours.” This is in contrast to Wood’s tendency in the first part to over-explain. But I want to celebrate this book because it is rich, beautiful and written by an author of great depth and resource who is clearly giving his all in the service of that most taxing of artistic endeavours: the writing of a fine novel.