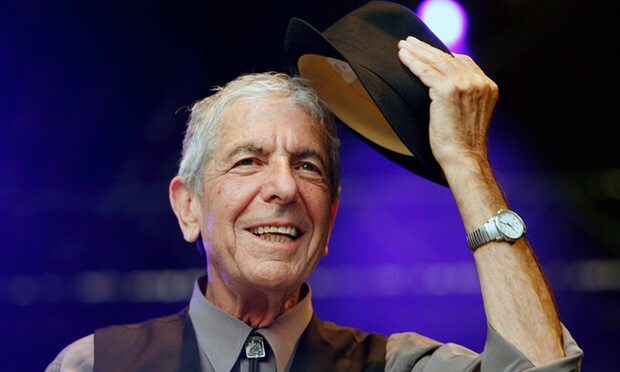 The first time I thought consciously about Leonard Cohen’s death was in 2002. I was listening to his 2001 album Ten New Songs while crawling my way through the writing of a novel in which each chapter took its title from one of the poems in The Songs and Sonnets of John Donne. I remember hearing the following lines, among the hundreds of Cohen’s that I’ve come to revere: “So come, my friends, be not afraid/ We are so lightly here/ It is in love that we are made/ In love we disappear.”

In that moment, a network of biographical and thematic connections between Donne and Cohen suddenly rose up in my mind. No man is an island. Death be not proud. The bearable and the unbearable lightness of our being. The way that love makes us and remakes us. The secular sacrament of our lovemaking itself. The lover as saint. The high seriousness of love and death so entwined. The abiding generosity towards their listeners. Can there be two poets who credit their audience with more intelligence than Donne and Cohen? I wrote a few notes about the idea, the last line of which I underlined: Leonard Cohen is John Donne to Bob Dylan’s Shakespeare.

The pair have long been linked in my mind. And ever since I was a teenager, Dylan and Cohen have been an essential gloss on my experience, a significant part of my feeling for human iniquity and transcendence. This is to do with their eloquence, of course, their revivifying poetic intelligence, their seasoned wit. But also the sensibility they share – that their affirmations are narrowly won after much hand-to-hand fighting with discouragement in both the private and the public realms. “The world’s whole sap is sunk” – so Donne says – but intimately to know this and then to write and sing about such a defeat is somehow to seize something back. “I’m junk,” Cohen sings, “but I’m still holding up this little wild bouquet.” The fallen state is the only state and, it turns out, the holiest, most resonant and most truthful.

And yet while Dylan’s lyrical gift is wild, copious, and immoderate, Cohen’s is precise, supplicatory and cloistral. Where Dylan rambunctiously inhabits the multifarious world, Cohen more often circles the many mortal contrarieties that lie between the lovers’ bed and the altar – regularly, for him, the same thing. Where Dylan’s genius often has a dizzying and effortless quality, Cohen’s feels mesmerisingly measured. You have your Dylan days and your Cohen days, and they’re very different.

Like Donne, Cohen began as the great lover-poet anatomist of the heart and ended as the priestly-poetical anatomist of the soul. And, of course, as with Donne, when you start to look a little closer, you find that the amorous and the ascetic, the profane and the sacred, Eros and Thanatos have been intimately bound throughout. “I’ve heard the soul unfolds,” Cohen sings, “In the chambers of its longing.”

There’s also consonance in the way the verse itself is made. Like Donne, Cohen has that rare ability to render the concerns of the mind, body and spirit with equal fidelity in a single work, or sometimes in a single line, and none at the expense of the other. His writing has that same feeling of being wrought to its purpose by a fierce animus – “there’s a blaze of light in every word” – of being vividly alive with the intelligent energy of human paradox: assertions are instantly countered, beliefs undermined, theses overtaken by antitheses, the profound and serious valiantly foregrounded only to disappear through trapdoors of irony, wit and self-mockery. Thus, the drama of Cohen’s intelligence, as with Donne’s, somehow becomes the drama of every human intelligence; for we are all of us busy deep down with the back and forth between love and death; between the redemptions of human intimacy and our need for a redeemer God to rescue us from transience. A God, by the way, in whom Cohen and Donne have a great deal of trouble believing. “Thou hast made me, and shall thy work decay?” (Donne). “A million candles burning for the love that never came” (Cohen). Their holy verses are not so much about the divine as they are about humankind’s search for the divine; for both of them, God is the Great Absentee who nonetheless presents his long list of demands.

Perhaps some of these correspondences can be attributed to a surprising similarity in certain aspects of their biographies. Donne was born in 1572 into an eminent Catholic family when persecution was the Catholic birth-right. On his mother’s side, he was descended from Sir Thomas More and his uncle was the head of the secret Jesuit mission to England. Cohen was born in 1934 into an eminent Jewish family in Montreal. On his mother’s side he was descended from a rabbi and Talmudic writer. The boyhood of both was lived with close awareness of brutal religious oppression: for Cohen elsewhere, in Europe, but terrifyingly extensive; for Donne right there in his own family and terrifyingly particular. Both came from families that prized intelligence, both knew the Bible intimately and both sought salve for their wounds – maybe even salvation – in their relationships with women.

It is this fusing of the sacred and the sensual that they share most of all. Think of the end of Donne’s “Holy Sonnet 14” where the speaker startingly addresses God as if wishing for a violent lover: “Take me to you, imprison me, for I, / Except you enthrall me, never shall be free, / Nor ever chaste, except you ravish me.” Think of the couplet in the fifth verse of Cohen’s “Hallelujah” which seems, on first hearing, to contain a non sequitur: “Maybe there’s a God above/ As for me all I’ve ever learned from Love …” Until, that is, you realise that for Cohen, love and God are one and the same.

The last recorded words on the last song of Cohen’s last album – released only last month – seem to me to be the ultimate distillation of this mingling. The human lover and the love of a difficult God addressed together – in one final, beautiful breath of unrequitable longing: “I wish there was a treaty we could sign/ Between your love and mine.”