The Batman of Obscenity 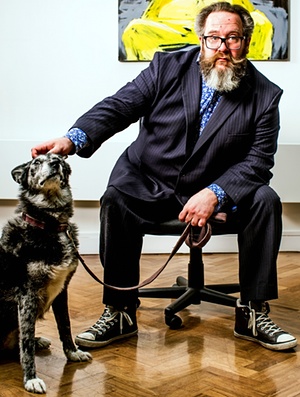 Myles Jackman is on a mission to change Britain’s obscenity laws. For him, it’s more than a job, it’s a moral calling…

One evening in the late autumn of 2008, Andrew Holland returned from holiday to discover that the front door to his home in Wrexham had been smashed in. Thinking he had been burgled, he phoned the police. They came straight round – and arrested him.

It was the police themselves who had forced entry to his home. They had taken his computers in pursuit of what turned out to be an unfounded allegation; however, in searching the hard drives, they found something else. The original charges were duly dropped and instead, in the spring of 2009, the police indicted him with possession of two images under the new Criminal Justice and Immigration Act 2008. One image was from a sadomasochistic series called the Body Modification Extreme Pain Olympics; the other showed – as the law has it – “an act of intercourse with a live animal”. The animal in question was a tiger.
On the streets of north Wales, in the newspapers and all over the internet, Holland quickly became known as “the tiger-porn guy”. As he told me, the consequences were “worse than being dead”. Vigilantes staked out his house. Hate mail and excrement were posted through his letterbox. He was banned from seeing his daughter for 18 months. He had a heart attack.

Meanwhile, from the roost of his London flat, Myles Jackman was watching. His was a constant vigil – Google alerts, Twitter, the forums, the court reports – for he was a man with a mission so unique that he alone considered Holland’s case to be an opportunity. More than that: a chance to change the world.

Myles Jackman is Britain’s leading obscenity lawyer. But he does not merely defend the accused: his life’s great plan and purpose is to rid this country once and for all of its laws criminalising extreme pornography – laws that he regards as morally and socially iniquitous. Jackman is broad and tall with plaintive eyes and a beard like Bedlam straw. From a distance, he looks vast and indomitable, a figure of great appetites and refusals, the rogue lawman in a spaghetti western. But close up, he’s softer, sensitive, comradely, far more Hagrid than Sergio Leone villain. (The invite for his 40th birthday, last November, asked friends to “a funeral – for the death of youth”.)

Jackman fervently believes he has to lead a crusade against what he sees as the unjust obscenity laws and that he absolutely must succeed – or else fail himself, his allies and the wider cause of civilisation as he sees it. He maintains that pornography is a class issue, a gender issue, a philosophical issue, a freedom issue, an everything issue. (One of his many dicta: “Pornography is the canary in the coal mine of free speech.”) And his campaign is against both state and statutes alike. By day, beneath the dark lawyerly suits that strain to contain him, he likes to wear Batman socks; by night, he wears Batman T-shirts. In the last six years or so, he has transformed himself from being just another lawyer into the Batman of obscenity.

PrevPreviousFormula One: the limit of human skill
NextBeatlebone by Kevin Barry review – a darkly wry trip to Beatle IslandNext
Go to Top