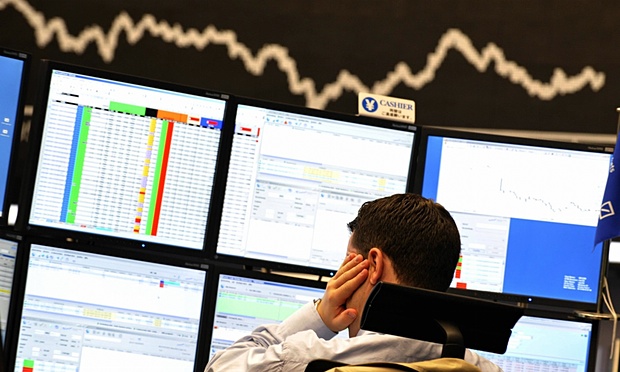 This is it, at last: a fine work of fiction set in the present day that kicks all those asses that so urgently need to be kicked. Twenty pages in and I wanted to tour the nation’s nine remaining bookshops with Murray and shout from the back: “That’s what I’m talking about, people; this is what a real novel should be. Fuck all that ersatz pap you’ve been sold; read this!”

The Mark and the Void is the best novel I have reviewed by someone of my own generation writing on this side of the Atlantic. It’s unabashedly intelligent, it’s ingeniously inventive, it’s richly alive in language, thought and character; it’s read-the-whole-page-again funny and philosophically engaged with the great questions and circumstances of our times. It is the answer to the question of what a serious and seriously talented contemporary novelist should be writing.

I say “set in the present day”, but what I actually mean is that it feels like it’s set right now. When I was reading it, I turned off the midnight news (about the European financial crisis) to read the last 50 pages (about the European financial crisis) and it was as if I were reading an impossibly ingenious up-to-the-second artistic gloss on the bulletin just gone.

Set in Dublin, it is the story of a French banker, Claude Martingale, and his bromantic relationship with a struggling novelist, Paul Murray. The plot is a joke – as plots so often are; but, in this case, it is a joke on several interesting levels. Basically, Paul is desperately trying to raise money, because he bought a ludicrous flat with a stupendous mortgage when the Celtic Tiger was at full roar. So he comes up with the idea of robbing a bank – a plan that he executes by pretending to Claude that he is writing a novel in which he wants to make Claude the Everyman hero. This gives Paul the excuse to come in and stake out the bank with his sidekick, Igor. The plan is terrible, of course – it’s a merchant bank, for one thing, and doesn’t have a safe or any actual money.

Paul’s next plan is terrible, too. And the one after that. In fact, everything Paul does is terrible; a puerile farrago of distraction and rejectamenta. But gradually, Claude cajoles the novelist back to the idea that maybe there is a book to be written after all…

Needless to say, such an outline describes very little of what The Mark and The Void contains, because this is a novel about the nature of our society, about civilisation itself; about (as Paul hopes) “modernity as it really is”; about how a large bank “creates its own reality”; about the true nature of capitalism, the true nature of art; about how the beleaguered latter responds to the rampant former; about philosophy; about anthropology, the human story, our simulacra and our chimeras; about what technology is doing to us; about alienation, globalisation, money. (Martin Amis’s great work Money hovers somewhere in the coulisse of the pages, like a principal turned instructor smoking roll-ups and squinting at the performance.)

It’s also a book about writing itself – the asphyxiation of the novel form. And what writing it is – which matters, because in order to produce something really great as a novelist you have to marry bold and significant themes to subtle, skilful and consistent artistry (as well as all the other jobs). No problem for Murray, because he has that rarest of writerly qualities: good taste in words. The dialogue, the description, the line-by-line word selection and decision-making is everywhere fine. His handling of character and scene description is deft, apposite, original, telling, choice. The “rain-logged” Irish sky, for example, “is a rag soaked in chloroform, pressing down relentlessly on the city”. And the “clogged gutters quickly become filthy lakes over which pedestrians skip and dance and hop with grim grey faces, as in some totalitarian musical”. A minor character has the “look of a medieval mendicant, flagellating himself around Europe”. After Igor finishes a disquisition on a porn film, he “retreats into a prolonged cacophonous cough, a sound like shovelling coal”. I love that use of “retreats”.

Weaknesses? Maybe the humour is a little too sexualised (it’s so high in the mix, we start to hear issues we’re not meant to hear). Maybe there’s a whisper too much of explanatory non-natural dialogue. Maybe cut the whole thing one slice leaner.

But nobody ever wrote anything perfect, and this is such a great book that I’m recommending it unreservedly.

PrevPreviousQ & A with The Guardian
NextFormula One: the limit of human skillNext
Go to Top