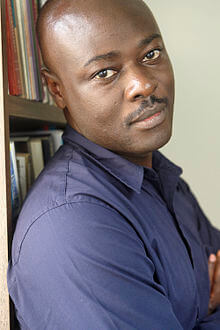 Helon Habila’s fourth novel has it all – intelligence, tragedy, poetry, love, intimacy, compassion and a serious, soulful, arms-wide engagement with one of the most acute human concerns of our age: the refugee crisis. This is the answer to the question of what contemporary fiction can do, and the reason I laugh whenever people say (as a character declares ironically in Travellers) that the novel is dead.

Originally from Nigeria, Habila lives and teaches in the US. Back in the academic year of 2013-2014, though, he was in Berlin on a fellowship, and it is in this city that Travellers begins. The novel is divided into six sections. In One Year in Berlin, a nameless Nigerian academic, the principal narrator, falls in with protesters – who are “protesting everything” – and in particular with Mark from Malawi, who turns out to have had a previous identity; he is now “out-of-status” and therefore deportable. He also meets a Libyan doctor, Manu, now working as a bouncer, who lost his wife and child in a boat that sank at sea. Each Sunday, Manu looks for them at Checkpoint Charlie – the title of section two. Portia, a young Zambian student, is the daughter of a dissident poet in exile in London. She sets off to Basel (the title of section three) with the narrator to interview the woman who married and then killed her brother.

As Habila does with Europe, so too with European literature; you read it, experience it, feel it anew

In The Interpreters, Karim tells the narrator the story of his flight through Yemen, Syria and Turkey and his year in a Bulgarian jail trying to protect his sons. In The Sea, a woman who has lost her memory languishes in southern Italy and marries again – only to remember the husband she already has. When the narrator comes to London with Portia, they chance upon Juma, an asylum seeker hiding from immigration officials in a neighbouring flat. His whereabouts have recently been made public and now there are two sets of protesters outside – those trying to prevent his arrest and those demanding it. Juma himself is fasting, also out of protest; this is the sixth story, Hunger.

I’ve read fine journalism that reports on asylum seekers, the refugee camps of Europe and the journeys across Africa and the Mediterranean – but this novel’s great achievement is to make you feel it, smell it, live it. You’re in the sea – drowning, panicking, lost, “people clawing their way up to the deck, kicking and screaming and holding on to their children’s hands”. You’re in the camps on an Italian island where refugees have “rotting feet in their wet shoes … [and are] delirious with fright from being between dead bodies in the boat”. In London, you are jostled as you pass through the “nativist” protesters while a bus with “foreigners out” written on the side circles “round and round, slowly, like a shark circling a drowning swimmer”. You feel acutely the hostility of the “hostile environment” that is the Home Office’s cruel and inhumane immigration policy.

‘You feel acutely the hostility of the Home Office’s “cruel and inhumane” immigration policy.’ Photograph: Home Office/PA
Travellers is also replete with literary references that twist and gleam through the narrative, adding light and riches and setting off unexpected resonances. There is Flaubert’s image of the “river of shit relentlessly washing away at the foundations of every ivory tower ever built”, and Dostoevsky on love; Milton’s drowned Lycidas, Matthew Arnold and John Donne; TS Eliot’s The Waste Land and The Leopard by Giuseppe Tomasi di Lampedusa. Shakespeare is everywhere.

As Habila reinterprets Europe, so too with European literature; you read it, experience it, feel it anew. Arnold’s “Dover Beach”, for example, is invoked from the perspective of a refugee in the Jungle at Calais: looking at the French shore, Juma’s friend comments that “Arnold says something about the ‘eternal note of sadness’”. And Juma replies: “I know what that means.”

And this is the novel’s greatest triumph – to conjure in the reader the seemingly irreconcilable feelings of both intense revivification and displacement. By the end, you feel as though you, too, are seeing what Europe means afresh: its racism, its confusion, its attraction, its incoherence, its safeties. But you are also full of stories of African conflict, dispossession and human suffering. Again and again, Habila asks the deepest questions about the relationship of Europe to Africa and Africa to Europe. And with great skill, he makes the unfamiliar familiar and vice versa. What more can you ask of a novel?

PrevPreviousTrio by William Boyd review – superbly wry and wise Set on a Brighton film set in 1968, this showbiz story is intricate and funny – but should William Boyd be taking more risks?
NextFive-Minute MemoirNext
Go to Top