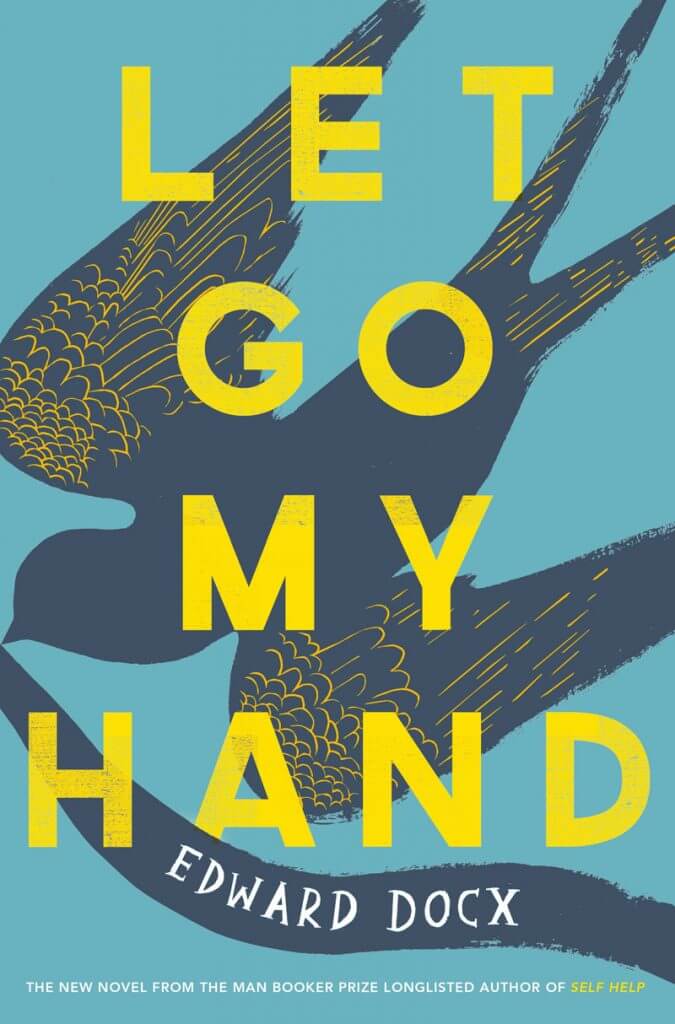 Louis Lasker loves his family dearly – apart from when he doesn’t. There’s a lot of history. His father’s marriages, his mother’s death; one brother in exile, another in denial; everything said, everything unsaid. And now his father (the best of men, the worst of men) has taken a decision which will affect them all and has asked his three sons to join him on one final journey across Europe.

But Louis is far from sure that this trip is a good idea. His older half-brothers are wonderful, terrible, troublesome people. And they’re as suspicious as they are supportive . . . because the truth is that they’ve never forgiven their father for the damaging secrets and corrosive lies of his past. So how much does Louis love his dad – to death? Or can this flawed family’s bond prove powerful enough to keep a dying man alive?

Let Go My Hand is a darkly comic and deeply moving twenty-first-century love story between a son, his brothers and their father. Through these vividly realized characters, it asks elemental questions about how we love, how we live, and what really matters in the end. Frequently funny, sometimes profound, this is an intimate, beautifully-written and life-affirming book for everyone devoted-to and despairing-of their family.

‘A humorous and compassionate novel . . . The nature of what constitutes a Dignitas family is the moral question that Docx’s novel attempts to clarify, with a great deal of compassion, humour and contradiction . . . a personable, credible narrator with a felicitous turn of phrase . . . Docx’s great achievement is to establish a character who really isn’t sure what he thinks, and whose emotions vacillate continually between resolution, uncertainty and a certain form of revulsion . . . It’s a humane, humorous and ultimately extremely moving novel’ Guardian

‘A road trip to Dignitas sounds like a bleak premise for a novel. However, Docx’s story of a dysfunctional trio of sons driving their father across Europe to an assisted suicide appointment is as far from bleak as it gets . . . Let Go My Hand is essential reading for everyone who’s ever been involved in a stepfamily – or any family. Not only is Docx frighteningly acute about human nature, he’ll make you laugh and cry too. Just brilliant.’ Mail on Sunday

‘A grown-up love story between a father and his sons . . . I have a theory that there are two kinds of novelist, the intellectual type and the emotional type . . . I may have to reconsider my idea, however, having read Edward Docx’s fourth novel, which combines the best of both worlds . . . an incredibly touching story of the tender and indestructible bond that exists between a father and his three sons . . . It’s refreshing. There’s not enough written about how families can actually like each other; it’s almost always about the traumas that cause them to fall apart . . . while there is great humour in this novel and often some laugh-out-loud moments, there is pain there as well . . . It’s a curious thing when a book about death can prove so life-affirming. It’s something to be admired’ John Boyne, Irish Times

‘This is fiction with heft and moral nuance; a novel that gets its hands dirty in the soiled laundry basket of family secrets and resentments. As such, it’s his most universal, moving and resonant work to date . . . Startlingly short on sentimentality, given its subject matter, and fluent and insightful . . . [Docx] deserves to win wider acclaim for this wise account of the throttled emotions of manhood, and of a family in terminal meltdown’ Spectator

‘A feelgood father-and-sons road trip with real emotional pull . . . a slick tear-jerker played for laughs . . . The action bristles with manic energy . . . Docx might have invited us to gawp at Laurence’s degeneration or debate the ethics of assisted dying; instead, he trains our eye on the jostling siblings whose mutual affection is bruised but intact . . . Much of the emotional pull lies in the question of whether Laurence wants to die or if he’s making a coded plea for forgiveness . . . but that doesn’t muddy the feel-good vibe. Ice-veined cynics be warned: get your kicks elsewhere.’ Sunday Telegraph, Book Club Choice

‘I chose to stop at page 389, a lump rising in my throat, sensing that it would be bad form to be openly weeping . . . I crept from the room with all the dignity I could muster, my lower lip trembling . . . Docx’s mastery of emotional verisimilitude had my eyes filmed with tears as I read the last few pages. I succumbed to the Laskers, to their unabashed seriousness and dirty jokes. I challenge anyone to read the bravura section in which the four of them stage a spontaneous Grand Prix on motorized wheelchairs in a Palaeolithic French cave without wishing them the deeply lived lives they so openly crave . . . a serious, big-hearted book.’ Literary Review

‘Laugh-out-loud humour in novels about terminal illness is more common than you’d expect, but the necessary blend with genuine pathos has rarely been better handled than in Edward Docx’s wonderfully readable new book . . . Apart from its finely judged tone, the book has a fierce momentum driven by the wavering determination of the three sons to carry things to the conclusion their father so devoutly wishes for’ Daily Mail

‘What must it be like to accompany someone you love on a journey such as this? Do you try to argue him out of it, do you hope he will at some point change his mind, do you seek to come to terms with it, recognising that he is terminally ill and that after all it is his right to end his life as he wishes? All of this and more is explored in Docx’s deeply moving novel . . . Docx, whose second novel, Self Help, reached the Booker shortlist in 2007, has a fine ear for convincing dialogue and for lovely little descriptive phrases . . . The bond between Lou and his older brothers is beautifully handled . . . convey[s] with depth and compassion the impact that decisions like Larry’s will have on partners and on sons and daughters’ Herald (Scotland)

‘A family road trip to Dignitas is an unlikely source of joy in a touching tale about complex male family dynamics . . . The really pertinent theme that emerges is that of duty — a duty to care for parents when they need you, to follow your heart and take every opportunity to live your life to the full . . . it takes a writer of Docx’s eloquence to articulate it. His lucid prose makes the characters’ complex thoughts engaging, and there are times when the Laskers’ voices are so distinctive that you can almost hear them talking.’ Max Liu, Financial Times

‘An undignified trip to Dignitas makes for an emotional read . . . The ticking clock of an appointment with assisted death is, however, an adroit way to force this quarrelsome quartet into confronting hard questions . . . He is good at evoking the foetid atmosphere of resentment and overfamiliarity between these four men . . . consequences of past events are revealed in their combative clash of wits, the bitter humour, the conversations like interrogations . . . Docx lets their talk swing convincingly from serious to mundane in the space of a sentence and seeks out a black humour even as they bring what he calls the “dark matter” of the family into the light . . . he confronts a messy, fraught and painful subject and pins it out for our examination, and there’s something deeply cathartic in that.’ The Times

‘Docx treats this difficult scenario of a family attempting to repair the past and face of a future already marked out by loss with an abrasive tenderness that allows for bad behaviour, dark humour and inevitable sadness’ Sunday Express

Ed’s fiction have been compared to Dickens (The Guardian and The Washington Post) and to Dostoyevsky (The Financial Times and The Washington Post) – as well as to Conrad (The Sunday Times), JM Coetzee (The Independent) and Julian Barnes (The Independent). With previous novels, he has won The Geofrey Faber Prize and been long listed for the Man Booker. Amazon (USA) listed Pravda as one of the best books of the year (2008) and Docx was named as one of the 21 most gifted young writers from around the world by The Hay Festival committee. His first novel, The Calligrapher, was cited by The San Francisco Chronicle as a best book of the year (2004) and was a finalist in The William Saroyan Prize (Stanford, USA).

Ed’s non-fiction appears mainly in The Guardian and New Statesman Magazine. He has been short-listed for The George Orwell Prize for Journalism and the Rowntree-Orwell Prize. He regularly appears on radio and television as a cultural commentator and he reviews fiction for The Guardian.