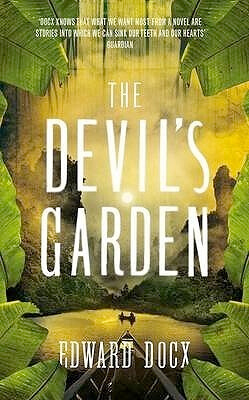 Dr Forle is a scientist living on an Amazon river station deep in the South American jungle where he and his international crew of colleagues work with locals to study the eerie forest glades that the Indians call ‘devil’s gardens’. Who or what has created these seemingly cursed places? The answer, he hopes, will change the way we think about evolution and the nature of life itself.

But when a sinister Colonel and a cynical Judge arrive, life at the station is thrown into chaos. These men claim to be registering the local Indian tribes to vote and yet, on the night of their arrival, Forle witnesses an act of violence that he cannot ignore. From that moment on he is drawn deeper and deeper into a world of brutality and corruption until he finds himself in the midst of a small war involving remote tribes, renegade soldiers, cocaine growers and the woman he has come to love.

The Devil’s Garden is a contemporary and mesmeric study of the hidden human heart. It is about religion and science, about the ancient and the modern, about love and exploitation, about the clash between the individual and the powerful opposing forces that seek to determine our future.

‘Along the way, there are many incidental satisfactions. Some lie in Docx’s expert laying out of scene after scene, but the greater art is in the refusal to dramatise or even disclose everything… Full of intellectual provocations as it is of suspenseful turns.’
Giles Foden, Guardian

‘Reminiscent of JM Coetzee or Damon Galgut… This poisoned Eden throbs with intensity and delivers and gut punch that leaves you reeling.
Independent on Sunday

‘Docx’s perceptive, thoughtful and argumentative drama about the human cost of the havoc the white man has wrought upon the Amazon… It’s an unusually intelligent thriller that refuses to take sides. One suspects Conrad would have rather enjoyed it.’
Metro

‘A charged, compelling fiction that moves from uncomfortable standoff to murderous pursuits while tilting at some of the cherished liberal ideas of Western civilisation.’
Independent

‘Docx is a master of disquiet, and brilliantly captures the bewildering effect of the forest in this immensely intelligent novel.’
The Spectator

‘A smart literary thriller that’s set in the perennially thrilling environs of the Amazon jungle’s remote heart of darkness…Docx has clearly done his background reading and the scientific digressions in the novel are lightly and engagingly handled: brilliantly hammering home how utterly shitty human’s are, and how completely amazing ants are in comparison… riveting Conradian page-turner that’s packed with devilish food for thought. What’s not to like?’
Dazed and Confused

‘Heartfelt… The novel is often exciting and there is a superb lost in the jungle set piece… This lush setting is vividly evoked in a clean, mostly unpretentious prose.’
Literary Review

‘Written with the economy of a political thriller… Reminiscent of the pared down fiction of Damon Galgut and Brian Moore, Docx conjures up an amoral universe inhabited by chancers and damaged loners. For those not so enamoured of the novel’s human cast, the spell of the rainforest is hard to resist; from the constant insect trill ‘like some great tinnitus’ to skies that change from ‘wan and smoky blue’ to ‘peach and pale vermillion’.
The Lady

‘Written in a punchy action packed paragraphs.’
The Economist

‘Docx’s descriptions of the rainforest are impressively vivid.’
Mail on Sunday